Potato-sized clumps of metal at the bottom of the deepest oceans might aid our fight against climate change, but mining these could also damage a world we know very little about.

More than 150 years after French author Jules Verne released his Twenty Thousand Leagues Under the Sea, the classic tale of deep-sea exploration, we know less about the deep sea than about the surface of the moon. Areas the size of massive continents and located thousands of metres below the water surface remain hidden from us. But now it turns out that they might hold a key to tackling climate change.

Technologies like electric car batteries, wind turbines and solar panels require rare types of resources that can be found in the seabed. Yet at the same time, mining them might represent an environmental curse – and some scientists warn that it might damage deep-sea ecosystems we know little about, and even disrupt oceanic processes.

Nevertheless, companies are racing ahead with deep-sea mining. Some 30 companies currently have permits to explore the bottom of the Pacific Ocean, with giants like defence and aerospace company Lockheed Martin and Belgian dredger DEME creating their own gambits into deep-sea mining.

The Dutch maritime technology company Royal IHC is participating in this new rush. It has extensive experience in areas such as dredging and offshore construction, and is now diversifying into deep-sea mining. ‘Building equipment for deep-sea mining is very logical for us. It’s related to areas in which we have been working for more than a hundred years,’ said Laurens de Jonge, manager of marine mining at Royal IHC.

In the past few years, they have been developing the technology necessary to mine at great depths. Their current focus is the extraction of small clusters of resources called polymetallic nodules. These are generally between 1 to 15 cm large – between the size of a golf ball and a large potato. They contain metals and minerals which are crucial to technologies like batteries or wind turbines.

These little nodules litter the deep-sea floor in certain areas, but getting them up in a profitable way can be somewhat of a challenge. This is something Royal IHC explored in several European projects, the latest of which was called Blue Nodules.

‘It’s not as romantic as the undersea travels you can read about in Jules Verne,’ said de Jonge. ‘The logistics are the hardest, because we need to scale up these operations so the mining can be done on an industrial scale.’

The process starts with an uncrewed submarine attached to a boat on the surface. This submarine extracts the nodules hydraulically by pushing them up, and then sucking them into a large pipe which moves them to the surface, 5,000 metres up. There the nodules get collected on the ship, and separated as much as possible from water and sediment before being transported to land.

That sounds simple enough, but the entire chain can be fragile. In April of this year, the 25-tonne robot Patania II, from mining company GSR, which was also involved in Blue Nodules, got stuck on the Pacific seabed. And that’s not the only danger. ‘The pipe needs to have a constant flow,’ said de Jonge. ‘If there’s an interruption it can turn into a drama, because all the collected rocks and sediment in the 5,000-metre long pipe will come down again.’

Another issue occurs when the nodules are transported to other ships. Remaining water and sediment can get pressed together, and start accumulating in the ship hold, leading to ships dropping to one side, or even capsizing.

In the meantime, researchers are asking not only whether we can mine at such depths, but if we should. Dr Diva Amon is a Trinidadian marine biologist specialised in the deep ocean who is researching whether mining there might do harm. Dr Amon notes how the deep sea is one of the few, largely unexplored areas of earth.  ‘Every time you go down you find new species and habitats,’ she said. ‘That’s an amazing thing to be a part of.’

The areas where deep-sea mining can take place are largely unexplored, and often contain many undiscovered species. In the project Scan-Deep, Dr Amon tried to index a few of these in the Clarion-Clipperton Zone, a part of the Pacific Ocean which is 4.5 million square kilometres large, about half the size of the United States, with depths of up to 5,500 metres.

In this massive area undersea mining might take place, which is why Dr Amon and collaborators tried to chart the megafauna living there. ‘I focus on animals that are larger than two centimetres,’ Dr Amon said. ‘We analyse those in two ways: by collecting pictures or videos of the deep ocean and by gathering samples of the specimens.’

Essentially, an uncrewed submarine or ROV dives down into the zone, and collects footage of specimens at the bottom of the ocean, or even takes some of them up. Together with other teams from around the world, Dr Amon and her collaborators have been synthesising the megafauna in the area.

When thinking about the deep sea, the image of the anglerfish often comes up, the scary, toothy fish with a light on its head that it uses to hunt. But the animals Dr Amon and others have collected are quite a bit less terrifying. ‘Fish are easily scared away by the submarine,’ she said. ‘So I mostly study invertebrates such as sponges or corals.’

Nevertheless, the results were quite impressive. Up to 80% of the megafauna spotted during the research were new species, attesting to how little we know about the area. Dr Amon and collaborators also discovered fields of fossils on the seabed, containing whale bones, shark teeth and the remains of extinct species. 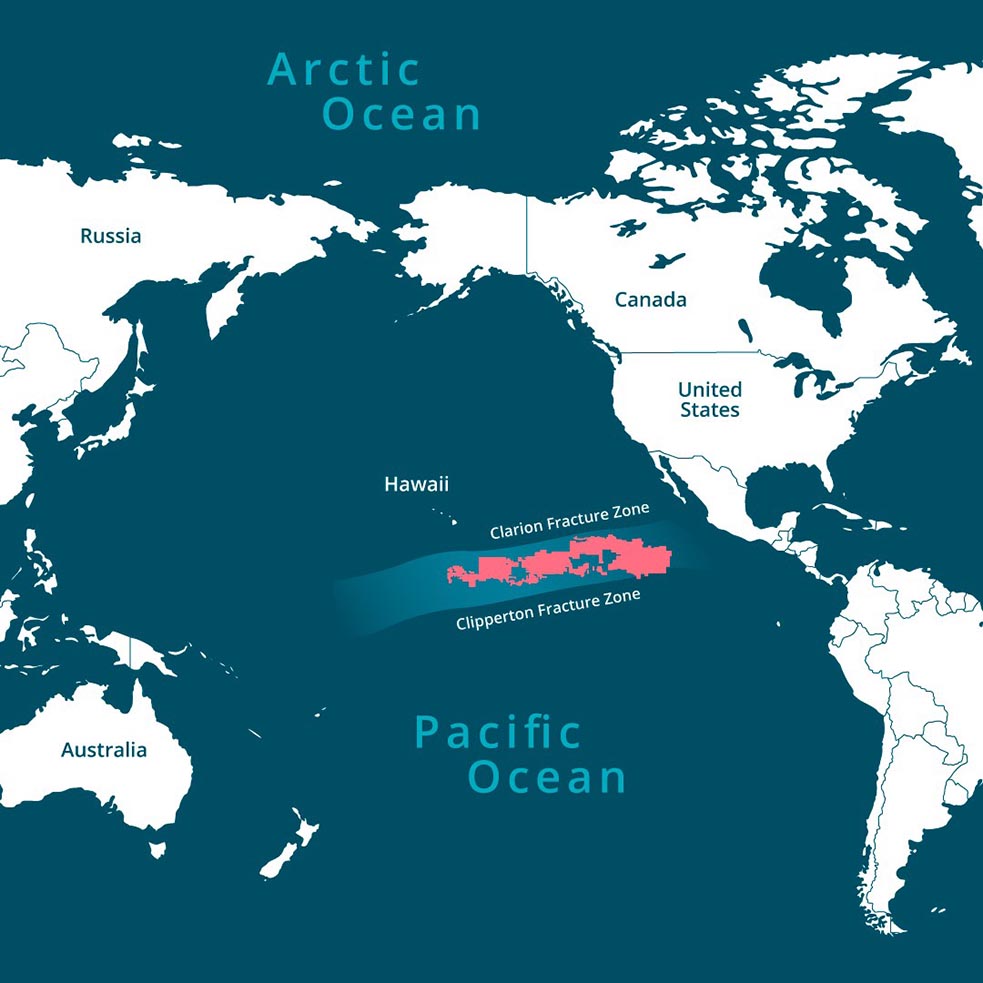 In this special ecosystem we’re about to engage in mining, which represents a delicate operation according to Dr Amon. ‘We have a few pixels of information about these places,’ she said. ‘We’re often the first people to ever go there. You’re just struggling to see what lives there, let alone understand the ecology of these ecosystems. We’re operating in a black hole of information, and we need to get a lot more science done before we can decide on whether to allow large-scale commercial mining there.’

Dr Amon emphasises that experiments with deep-sea mining are good, because they provide more information. But that we would need at least ten more years of research before we could reasonably allow mining on a commercial scale.

According to Dr Amon, mining could damage the deep sea in multiple ways. The vehicles could destroy the top of the seabed, leading to an inevitable loss of life among animals there. More importantly, robots could also emit plumes of sediment, which could cover fauna in the area around the mining site.

‘The ocean is very interconnected,’ said Dr Amon. ‘We often don’t even know how currents work down there. There are a lot of unknowns. There might be toxic or sediment impacts. Will fishing be impacted? Will it have an impact on carbon sequestration? These are big questions, and it’s not just the direct impacts but also the indirect ones. These big questions mean we should move forward in a precautionary way.’

The Blue Nodules project, meanwhile, did a test on the environmental impact of underwater mining. Here they focused on the plumes of sediment it might cause. Researchers from the Royal Netherlands Institute for Sea Research, partners in the project, made a grid of sensors across an area, and then tested how far plumes would spread. ‘We want to limit the spread of the plume, so it doesn’t damage a wider area,’ said de Jonge. ‘We modelled and verified them, and managed to reduce their spread.’

In the meantime, the International Seabed Authority (ISA), a UN-adjacent organisation, is debating rules for deep-sea mining, which should be defined in the next two years. Scientists like Dr Amon, but also companies like Royal IHC, are testifying to try and define a framework in which experimenting, and maybe even large-scale commercial mining, can take place.

According to de Jonge we will need a few more years of testing, with the technology being ready for industrialised mining around 2025. Way sooner than the ten-year testing period Amon suggests.

‘I’m against deep-sea mining if there are alternatives to give us the necessary resources,’ de Jonge said. ‘We sometimes call this the green dilemma, because humanity is dependent on these resources if it wants to survive climate change.’

‘I think it’s very rational to call for a pause on the transition from exploration to commercial exploitation,’ said Dr Amon. ‘That doesn’t mean we should stop policy-making or science, but commercial mining would be a mistake at this stage given how little information we have.’